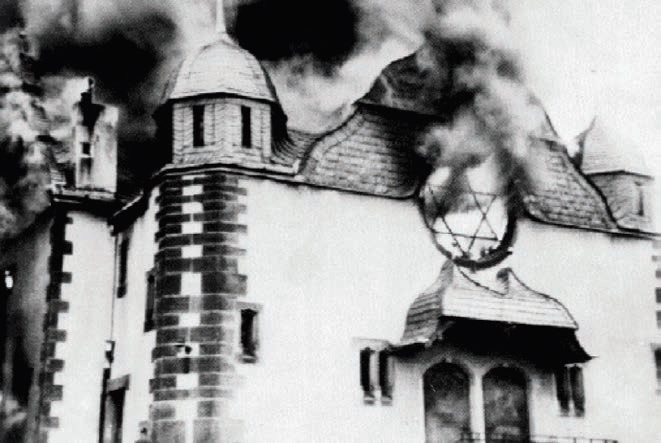 In 1935, Adolf Hitler passed the Nuremberg Laws which stripped Jews of their rights as German citizens and separated them from Germans legally, socially, and politically. In addition, Jewish property was confiscated throughout Germany.

As violence and anti-Jewish measures increased, Propaganda Minister Joseph Goebbels initiated a night of limitless violence against Jews and Jewish stores and property on November 9, 1938. Today it is known as Kristallnacht, the night of broken glass. During Kristallnacht, nearly 1,000 synagogues across Germany and Austria were set on fire, more than 7,000 Jewish businesses and homes were looted, nearly one hundred Jews were killed, and as many as 30,000 Jews were arrested and sent to concentration camps.

Hugh Greene, a correspondent for Britain's Daily Telegraph newspaper and eyewitness to the Kristallnacht pogrom reported, "I have seen several anti-Jewish outbreaks in Germany during the last five years, but ever anything as nauseating as this. Racial hatred and hysteria seemed to have taken complete hold of otherwise decent people. I saw fashionably dressed women clapping their hands and screaming with glee, while respectable middle-class mothers held up their babies to see the 'fun'."

On the 80th anniversary of this horrific event which helped pave the way for the Holocaust itself we encourage everyone to further educate themselves about this event and this period of time by offering our compilation of the Holocaust newspapers for $7 off through November 16, 2018. Use the coupon code: NEVERAGAIN